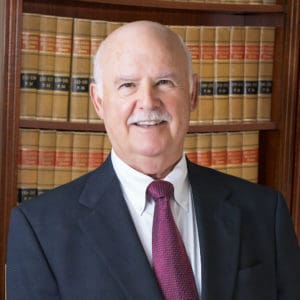 Mr. Steidley began his practice in 1969 in McAlester, OK after graduating from the University of Oklahoma College of Law. His practice focused primarily on criminal matters during the first 10 years. He had the opportunity to try dozens of major felony cases including 5 murder cases, which was a great opportunity for a young lawyer. After 10 years he focused his practice on defense litigation, with an occasional plaintiff’s case for friends and church members.

In 1976, he and Buddy Neal formed a partnership, beginning a 39-year friendship and professional relationship that has grown into a boutique litigation firm with offices in McAlester and Tulsa, OK. He and Mr. Neal have endeavored to assimilate the best possible combination of trial lawyers and support staff and are very proud of that achievement.

He was honored to be inducted into the American College of Trial Lawyers in 1996. He has been chosen to be named to “Best Lawyers in America”, Oklahoma Super Lawyers, and is a Fellow in the Oklahoma Bar Foundation. He served as the Chairman of the Oklahoma Bar Association Professional Responsibility Commission.

When not in the office or the courtroom, Gil enjoys his family, his wife Marilyn and their two dogs; Hanna and Habbie. He also enjoys being at the lake and on the water sailing, fishing and boating.

With three adult children, their spouses and seven grand-kids, Gil recognizes the importance of faith in the life of the family in today’s world.